Mister Basketmouth, Rape is NOT a Joke!

Dear Mr. Basketmouth. I write in peace, because war does not solve anything. Moreover I am desperate to communicate in a way that will get you to understand the gravity of what you did by sharing a horrible joke, whose punchline is rape. Of African girls. Not a white girl which is stated very clearly at the beginning of your joke. By the way please do not accuse me of turning this into a racial matter. No, Actually you did that. Here is your joke sir:


Oh and I took a screen shot of it in case you cannot believe that you would ever do such a thing. Here it is. 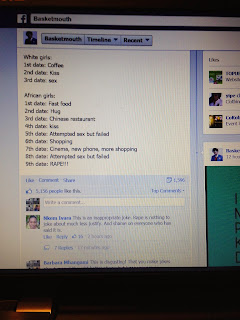 Mr. Basketmouth I am hoping that by the time I am done talking with you and the 5000+ people who liked and commented on your “joke”, you will have learned something about rape and why rape is a sick, vile and criminal act and why making light of this scourge that has everyone of us who has a vagina living with fear, is cruel and hateful.


We are not safe Mr. Basketmouth because men take our bodies and they rip us apart without a thought to the life- long trauma that we suffer as a result of such a violation. Mr. Basket mouth have you ever had anyone violate you by doing as they pleased with your body? Have you ever had someone grab you, throw you on the ground slapping you and telling you to shut up, then proceed to tear your legs apart and force his penis into your anus? Have you? I think not because let me tell you Mr. Basketmouth, because if it were so, you could never make rape an issue for comedy. I know comedians like to poke fun at all things and the irreverence is often what draws laughs. However Rape is not funny and if it elicits laughter, which it did in some of your fans,then this is a sign of depravity and a warning to all women that we are not safe among men, even the ones who purport to love us.


Would your joke be funny if your mother your sister, your aunt, your daughter had been raped? If you daughter or your sister had come home with blood running down her legs because some brute had seen her, not as a human being with feelings and a physical body that hurts and bleeds, but as a vessel for his lust, his rage, his disrespect and his misogyny?


Would your joke be funny to you if you came home to find your 6 month old daughter barely alive because 5 men had broken into your home and decided that a baby’s tiny vagina was big enough to contain their five penises one after the other, muffling her cries with her burp cloth until she passed out? 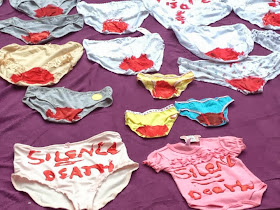 Would your joke be funny if your favorite uncle gave himself permission to pin down your 12 year old daughter as she gave him water to drink? How would you laugh when you came home and found her doubled over in pain with a haunted look in her eyes?


Perhaps you would guffaw at the news that your daughter committed suicide because she had been raped and could not deal with it. She had no one to tell because her father, comedian Basket mouth thought rape was a big JOKE? That he would laugh at her, and tell her she deserved it for having worn such a short skirt or having gone to dinner and allowed him to spend money on her? Mr. Basketmouth your 5,000 fans who loved your joke were making comments like: after all that she deserves to be raped. The few people who tried to be the voices of reason were insulted and heckled off your page, leaving an aggregation of the sickness that our men are. Yes those men who like your status are the sickness we have to contend with as African women. Those 5,000 odd fans of yours are part of the problem because their endorsement of your hideous attempt at humor is a signal that there is a fundamental hatred for African women by African men and that raping African women is fair game. 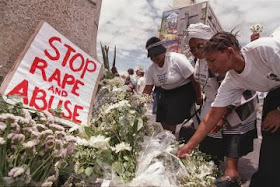 The fact that you think that you posted a funny joke means that you are also part of a huge problem that we face in this world, a problem that affects more than half the population. It also means that these statistics mean nothing to you and therefore African women and women in general mean very little to you.


Mr. Basket mouth one in 3 women will be raped or beaten in her lifetime. That is One billion people whose bodies will be violated. These are United Nations statistic. However judging on the response to your joke, and based on my own experience in the work of trying to end violence against women and girls, the number is more like one in two women. This means sir that your post today was in all likelihood seen by many women who have been raped. Let this sink in for a minute: Women who have been raped and saw your joke have probably been hurt all over again, because your joke makes a mockery of untold suffering that only she who has been raped will ever understand. Do you get why this joke is such a disgusting show of insensitivity and a blatant display of disrespect for women’s and therefore human dignity? The additional insult to injury are your 5,000 plus groupies who bigged you up for disrespecting African women. It is frightening to realize that these would be the type of men who would be bystanders watching a girl being raped, and still perceive themselves as being "good'. Good men who tell rape jokes, laugh at rape jokes and say nothing when women are disrespected are also perpetrators!


In my line of work we spend so much time teaching girls how to protect themselves from being raped. From an early age girls are taught to view themselves from the negatives,  that are heaped on them because men rape. It is girls' fault that men are depraved. We teach them not to walk alone after dark, not to be alone with boys, to wear “decent clothes”. Yet after all this, many are still raped. Why is that Mr. Basketmouth? BECAUSE BOYS AND MEN ARE NOT BEING TAUGHT THAT RAPE IS NOT A JOKE! We place the burden of being safe on girls but GIRLS DO NOT RAPE THEMSELVES AND YOUR JOKE LEGITIMIZES AND REINFORCES THE NOTION THAT RAPING A GIRL IS OK!!! Rape is NOT TRIVIAL!


Mr. Basketmouth I am tired of this work. I am tired because people like you make my work really difficult. While I and thousands of other activists are working tirelessly to educate men that under no circumstances is raping a woman ok, you are undoing our work 5,000 men at a time!!!! Haba!!! I am tired of waking up every single day to stories of women gang raped and mutilated in South Africa and India and in the U.S. military and in the Congo and you making a joke about this is really very demoralizing and it makes me very angry.


I hope that this letter will make you reflect for a moment and I hope that you also realize that your position of privilege and influence can be used for real positive social change in Nigeria and beyond. What would be great is if you are man enough to apologize to the women you have insulted and hurt by your crass joke. I also hope that you will consider undoing the damage you have caused those who so believed you were a decent guy. I was a fan of yours until about 2 hours ago when I saw your post. Now I only feel a heavy sadness, disappointment and a deeper desire to fight for Justice. Right now Justice to me looks like you Basketmouth issuing a sincere apology and becoming an anti-rape activist.


Once an avid fan
Barbara Mhangami