My Zimbabwe Part II-On Potholes and Police Ahead: Poetry Interrupted

A road trip across the country side of Zimbabwe is poetry in motion. Breath taking scenery flies by on either side of the winding tarred roads. From Mutare to Masvingo, that three hour drive through magical mountains, past sturdy thick- waisted baobab trees resolutely pointing their stunted limbs skyward, is a visual sensation. Our energetic and easily bored daughters are sitting quietly, their eyes taking it all in as it whizzes past. Cyril is driving and he occasionally sneaks a look out of his window but he mostly enjoys only what his peripheral vision allows. He has to be on the alert for the occasional stray goat that may dart across the road bleating stupidly, or be ready to slow down for a herd of cattle crossing from one side of the road to the other. Once in a while a wild animal, a small antelope, might scamper out of the bush, make as if to traverse the asphalt, then dive back into the clumps of trees as though it has suddenly remembered that many of its kind have ended up road-kill, belly up in the heat, getting bloated by the hour until they explode to release a dizzying stench along with their innards. Such a fate is not his portion today. Perhaps tomorrow. 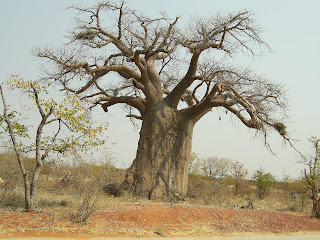 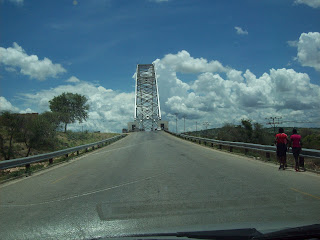 The sky is a clean, refreshing blue, littered only by the fluffy white cotton wool swirling and tumbling across its expanse. This sky and its litter of clouds is a constant companion on many a road journey and to look up is to be sucked into it, lost in its blueness and cloud phantoms; now elephants and  cherubs, then monkeys with curly tails and tall top hats. The girls’ eyes have closed in sleep and I allow my mind to wonder about who lives in the clusters of huts that form homesteads along the road side. I imagine conversations quarrels, laughter and whispers encased daily in the mud walls I think of the cries of the new born soaking into the walls, the beginning of  a new history and memories. 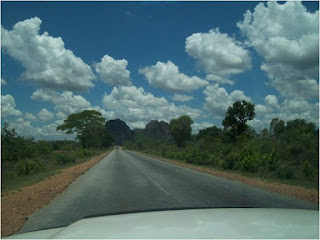 Just as my mind relaxes into my story, Cyril is slowing down, thanks to a sign that reads “Police Ahead”. In a moment of irritation I think to myself how some things never change. From as far back as I can remember, police checkpoints have been a consistent feature on a road trip in Zimbabwe. In the late seventies, during the war for independence, there were police checkpoints as well as checkpoints manned by the Rhodesian Armed Forces. I remember the diarrhea- inducing fear that these stops would evoke and I remember my father being as affable as possible as he responded to terse demands for his driver’s license and for his reasons for being on the road. Sometimes he was interrogated as to whether he had had any clandestine meetings with the terrs (black freedom fighters then know as terrorists or terrs by the Rhodesians). After what seemed like forever, he would be allowed to drive on. Now here we are a good thirty years later and we are pulling over to the side of the road at a police checkpoint. 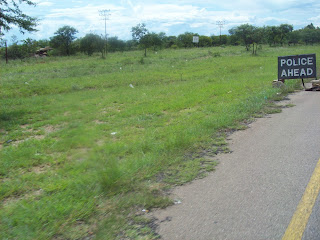 “Ah! Boss, how are they where you are coming from?” The officer in his navy blue pants, grey shirt and black boots uniform asks.


“All is well with everyone”, Answers Cyril, Mister Diplomacy frank –free- and -friendly.


The officer looks around the car, peers into the back seat at the pile of sleeping children, and sniggers. “Christmas box, boss” he says swinging his arms back and forth in what is supposed to be a casual gesture, signaling camaraderie.


“Ah you beat me to it bros, I was about to ask you the same thing. What are we drinking today?” Cyril responds with his own barks of fake laughter.


The officer guffaws, throwing his head back while wagging his index finger at Cyril,then he waves us off, wishing us a safe onward journey as he moves away from the car.

As we pull away, slowly, I loosen my teeth which have been firmly clamped on my tongue to stop me from blurting out at the officer: "What exactly are you trying to achieve by stopping random cars, asking after people you do not even know and therefore cannot in all honesty care about, proceed to ask for money, in the spirit of Christmas, then laugh like a demented hyena and wave goodbye? You did not ask for a license, registration, check the brakes or search for contraband or for soil from Marange (The rumor mill has it that people drive to Marange, dig up as much soil as their cars can carry and then once safe at home sift  through it for diamonds).” Cyril looks over at me after my rant, smiles and turns his attention back to the road.


This scenario will repeat in cyclical fashion every hour or so, and at each checkpoint, I have to convince myself that the neuronal connections that link my brain and its rampant activity to my tongue have been fried and therefore I am not able to utter the expletives that are free flowing and jostling for expression through my voice. There is no tongue, I tell myself, because to have a tongue  such as mine, at these checkpoints is to risk a 4 hour stopover at the side of the road in the blazing heat until you pay and grovel your way back onto the road and onward with your journey. But if- let us assume- I had a tongue, this is what I would ask:


"With due respect officer, sir, exactly what is your job description and are you paid well for roasting like a maize cob in the hot sun and for fishing (albeit surreptitiously) for bribes while your bosses sit up in nice cool offices in Harare? Are they aware that you are manning this checkpoint or did you and your fellow officers decide that this was a cool, easy way of making something extra on the side? Or maybe your bosses have explained that in order to keep people on the straight and narrow, in order that they may know their place, and that ‘Zimbabwe will nev-ah be ah colony ah-gain,’ you all have to man these checkpoints as a deterrent to anyone who has treasonous ideas lurking in their treasonous heads? Hmmm Officer, you can tell me (nudge nudge wink wink)."


We proceed after each checkpoint and I go back to the poetry in my head. I watch the landscape and think about all the frisky things Cyril and I could get up to in those bushes (It’s the heat, you see. Too much sun does that to a girl, and if she happens to be sitting next to a hot guy handling his business at the steering wheel…). As soon as these thoughts are blossoming and taking on exquisite forms, they are frozen as I feel the car swerve dangerously one way and then the other. Cyril has just missed driving into a gaping gnarly black wound on the road. Potholes, mxim! Now I have lost my delicious reverie and I am clutching my seat, taking deep breaths to try to ease the painful thudding in my chest. The road’s smooth surface is marred with potholes, giant man-hole type potholes which you have to swerve if you want to ever arrive at your destination. They remind me of a picture of Lagos I once saw of a group of men taking a bath in a pond that had formed in the middle of the road, the formation of a new phenomenon; the pond hole!  “Com an take your bat for free ohhh! Bring your own soap an sponge oh!”


I wonder how those who drive under the influence negotiate the pock marked roads on their way home from “MaNdlovu’s House of Happiness” or “Sesilia’s Sultry Sundowners”. The potholes are worse in the cities, a constant, silent indictment on the grossly inefficient, underfunded (or could care less) city councils that are responsible for road maintenance. Citizens are still made to pay road tax and it is infuriating to think that people pay in order that their vehicles can be damaged on the terrible roads, some of which are now no different from the dirt roads in the rural areas. Swerving to avoid potholes is one of the causes of accidents in the country, resulting in unnecessary loss of life. 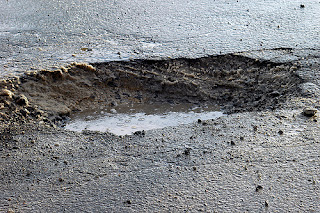 I look over my shoulder into the back and see that the girls are still fast asleep, oblivious to the ‘police ahead’, the potholes and their mother’s poetry interrupted. Just as well.