On Solidarity or Separatism- as We Look Ahead


I have been pondering deeply this last week on an issue that I think requires some serious attention. I believe it requires those of us who call ourselves feminists to think about what it is we really want. That question in and of itself is a broad question and one could argue that there are as many “wants” as there are feminists. Granted, however we are a group called feminists because somewhere along the line we realized that what we wanted as individuals might not be all that different one to the other. So a collective exists in which we have identified key common desires or objectives to work towards, but not to the exclusion or denigration of individual goals and choices. That for me is what feminism is in simple terms. So back to the what do we want question: I believe that what we want is to see the end of Patriarchy, its structures, institutions and cultural /social constructs, which have resulted in the disenfranchisement of women.  This is the simple definition. We can take this a step further and say that we want to dismantle patriarchy and its structures which have disenfranchised, enslaved and impoverished, women, people of color and which perpetuates a subculture of poverty and dependency in poor communities of color We want an end to racism which in many ways is an extension of patriarchy, and we want to see justice and basic human rights for all people. I would say that sums up feminism as I understand it.


The One Billion Rising Campaign culminated in on February 14, 2013, a day that I certainly will always remember as the one day in history in which women all over the globe stood together against one evil that threatens our lives and the life of this planet: Violence against women and rape. What this global campaign showed me is this: that when women set their minds to do something, we do it and we exceed our own expectations and shock the hell out of our detractors.


That having been said, the organizing and pulling off of such a stunt takes huge effort and resources, and requires impeccable communication and co- operation among and between the various stakeholders and grassroots organizations that sign up to this. I am still in awe as I watch video footage from all over the world and I get goosebumps when I imagine what was loosed into the universe that day. For me that “thing” that was set free is hope. I have real hope that if women are willing and determined, we can change this world. We can dismantle patriarchy, a tottering old geyser that is clinging on for dear life. We can heave this monstrosity into the abyss once and for all. But only if we want to, only if we choose to, only if we stop bickering, stop holding grudges, stop maligning the work of others stop and take ownership of our failings, and stop being combative in our efforts at resolving our internal conflicts, .


I have been saddened as have many of my fellow globally oriented feminist sisters, at the mean spirited rhetoric and lack of goodwill coming from certain quarters, particularly women of color. Sure without a doubt many mistakes were made, many issues were overlooked and perhaps there was poor planning and communication in the process towards One billion Rising 2013. Many things may have been overlooked because of the sheer size of the campaign and the fact that each region of the world interpreted the Vision differently. The whole idea of dance as a form of protest was repulsive to some but liberating to others and the fact that millions/billion turned out to participate is a good indication that there was a critical mass who truly believed. Those who did not said as much and some still believed in the Rising enough to create alternative activities. All this was welcome, embraced and found a place in OBR. However, to want to characterize what were genuine errors as wilful acts of evil, to then refuse genuine apologies and overtures to make things right for now and for the future says to me that there is a lack of goodwill, and I would go further to add that there is a certain willingness to stay in the victim pool, pointing fingers and yelling “White Savior Industrial Complex” [a male coined term BTW] at V-day and the OBR originators. This says to me that solidarity is not what some women of color are seeking because when offered an opportunity to represent their people, they refuse and state that it is going against their integrity and selling their souls for money and prestige. WOW!  To then proceed to call an individual who tries to do her part in improving the conditions of women around the world a white supremacist /colonial feminist leaves me with the sickening realization that: while some of us toil tirelessly for solidarity, others are busy unravelling the work. One esteemed sister of color  stated:
"I'm becoming very tired with us "women of colour" taking more issue with white women than with patriarchy, which is the true oppressor. Of course, racial prejudice needs tackling but the stance of *war* is not the way to go about it. Just like it isn't with men. The 1 billion rising scandals made me feel real sad, as like with the slutwalks black women were condemning it even before it had happened. Sure, we can, and should, be critical, but constructively not just for the sake of it! "


What I have found lacking in the way women deal with one another are effective and constructive ways of conflict resolution. Yes we will make mistakes, yes we will fight and not always agree. However we have a tendency to ‘throw the baby out with the bath water’ disengage, instead of looking at the situation to see how best to resolve it, and also to be honest and recognize our own shortcomings in the whole mess.


It would appear that many sisters of color have lost sight of what we are fighting: Patriarchy, NOT white women. Sure many white feminists do not understand us, and many really don’t care to. However or vision cannot be so jaundiced as to not be able to recognize those who is genuinely seeking to understand, to stand with us and fight shoulder to shoulder in our struggles, or offer any assistance that we require. Sisters of color need to ask themselves a basic question especially when throwing around terms like “Whites Savior Industrial Complex”, which further states that they support brutal policies in the morning. When the Republicans repealed the Violence against women act (VAWA) late last year in the US, it was White feminists who fought hard who demonstrated and made huge amount of noise to have it re-instated. Many groups of women of color did too, but let’s face it on our own that law would not have come back. Why? Because the women most affected by VAWA are marginalized women of color and the part that was a sticking point was whether perpetrators of violence who were caught on Native American reservations committing violence were to be judged by the courts of the reservation or in conventional courts. In other words white men who raped Native American women on their reservations would be tried in the usual courts and of course probably get a lighter sentence than if tried in the tribal court system. This to me is solidarity and runs contrary to the definition of the white savior complex being in support of brutal policies. So why, as women of color are we choosing to use this term out of its original context and in order to cause harm to an organization run for and by women? 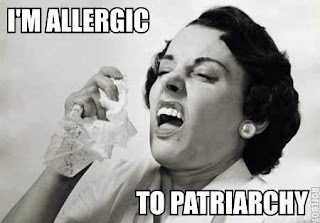 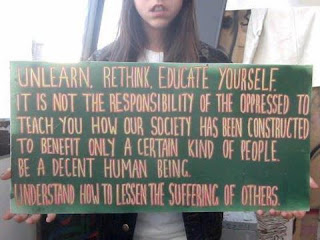 It is our collective responsibility, privileged, unprivileged, rich, poor to educate one another on how the world has become such a mess. We should all be prepared to take part in difficult conversations that challenge all of us, if we are serious about real change. If we are playing politics and trying to undermine embarrass and ridicule one another then that is quite different. To expect white feminists to carry the burden of learning about the struggles of each and every disenfranchised group of women on this planet is madness. In order to reach a point of cultural awareness sensitivity and competence, we have to teach and be open to those who genuinely seek to learn. Yes I know we know most of what there is to know about whiteness because the whiteness construct is all pervasive and the white narrative is the dominant as history has shown us. However we need to move beyond this and when we as women of color get opportunities to share to use our voices then instead of being snide, we need to shout and scream our stories, so none can claim they did not hear. There are alternative and diverse narratives and we who own these narratives also have a responsibility to share them. But if we are closed and unwelcoming then we cannot turn around and complain that mainstream feminism takes no interest in what minority women have to say. We also need to question our motives for being cold and welcoming and ask exactly were this will takes us as a group. Of what benefit is it to name all and to write open letters that really only do one thing: humiliate and diminish another. Genuine critique and a desire to make progress will not happen through toxic "open letters". In fact those letters have a tendency to put people off, even those who would otherwise be supportive of a genuine grievance.


I learned a new term this last week: Cupcake feminism. The analogy is that the cake part is white and there are colored sprinkles on the frosting. In other words, there is this idea that women of color are being used by white feminist organizations as ‘token’ people of color so as to legitimize the organization’s claims to diversity and inclusion. Personally I think that is a stupid term because I do not see any right thinking woman of color agreeing to being a token and being in a position in which she has no real power or voice. Many people who find themselves in this position will eventually see the through the sherade and leave. It is actually quite condescending to believe that women of color would fall for a cheap unintelligent trick like that. 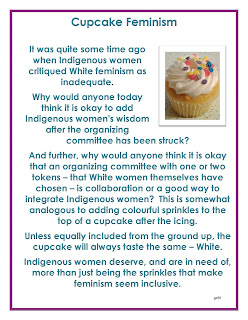 So back to my question: Can there be solidarity among and between the various feminist groups around the world? My personal response is a resounding yes. I want to keep believing in this but I also what to acknowledge the autonomy of each diverse group and stress that while we can be in solidarity with one another, our issues are too varied to expect us to merge synchronously at all times. There will be clashes mistakes and fights and arguments. It is how we deal with these that will keep us cohesive or tear us apart. We need to acquire the skills that will allow us to move ahead. As my papa Ikhide Ikheloa said to me in our therapy session earlier today: " Better is the woman who does good and makes mistakes, than the woman who does nothing and makes no mistakes."


For those who think separatism is the only way: good luck. Just please take your begging bowls home and don’t keep asking for money from “the white saviors”. Do it all your selves and all the best. Do not whine about being "marginalized", because you choose this state of affairs.


Just remember that we share a common foe: PATRIARCHY. 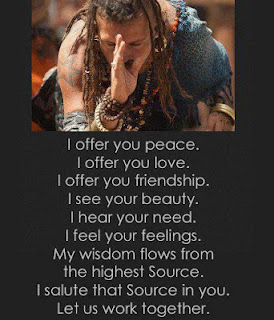