The Muse for Women is a group of poets who write about the social condition of women around the world and seek to conscientize people around issues of Violence against women. The last few months I have been immersed in activities around women's issues and engaged in conversations about how violence against women can no longer continue unchallenged. From the US presidential campaign and the Republican push to reverse reproductive rights, the Violence Against Women Act (VAWA), to the unintelligent remarks about women and rape to the censure of a female Michigan politician for saying the word vagina in an address to the House, I have followed closely. The situation of women in other parts of the world, from Zimbabwe to India, from Egypt to China is clearly sub standard as far as violence is concerned. The stories of gang rape of women in the Congo and in Syria, where rape is a weapon of war are enough to send one spiralling into depression. However the story that shook many of us and made us heart sick was the story of Damini, the 23 year old Indian medical student who was brutalized on a bus by six men and left for dead. The story can be found here. The Muse for Women decided to put together an anthology around the theme of violence against women as a tribute for 23 year old Damini. I was asked by one of the editors to contribute a poem and I am sharing an excerpt with you.

In two weeks on February 14, the campaign One Billion Rising, a global call to Rise, Strike and Dance as a way to create a heightened awareness to gender based violence will come to its climax. I have been a part of the journey towards this grand finale of global mobilization where different groups the world over will hold events in their communities. more information can be found here.
The request for a poem by Muse for Women was just what I needed to deal with the turmoil that daily, relentless exposure to the horrors of violence against women can stir. So thank you Muse for Women for this outlet for our pain which we exorcised in poetry! Here is an excerpt From Brute on my Body. Acerbic Anthology will be out in the next few days and details where to purchase will follow.


﻿
﻿
﻿
A wasteland of war.
Battlefield my body. Weapons of mass violation,
Diabolical drones pierce the sky of my soul.
They throttle the laughter of my joy,
And darken the portal to my ecstasy.
Thieves pillage my orchard of sweet solace,
And spit shards of agony into the universe.
Constellations crash and burn while
The brute on my body
Lays my soul a wasteland of war.
Earth will revolt and regurgitate
The grimy grizzle of war.
The putrid odor of warlords
On her body, my body, our bodies
Will be washed away in defiant tears
And mutinous sweat;
Her sweat, my sweat, our sweat.
She will Rise, Resist and Strike
Down the stalwart bastions built
On our blood and bones
For our own oppression and violation.
We will dance again.
Barbara Mhangami –Ruwende, 2012 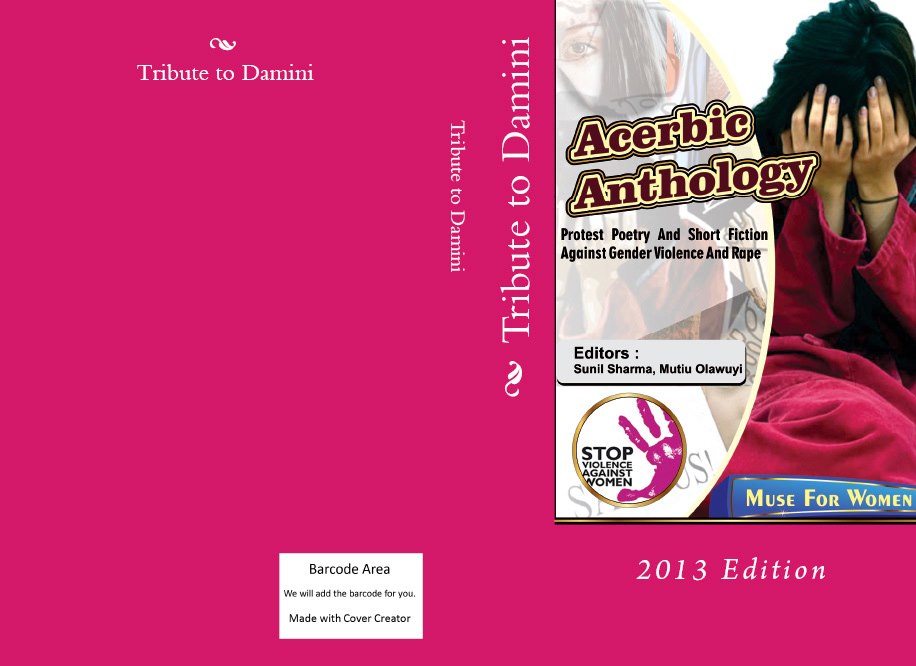